I’m skipping a few destinations of late 2016 & early 2017 to write about Croatia, because I strongly feel as though it should be added to anyone & everyone’s travel list (And if you’re anything like me-apologies for the extra paperwork). My Adriatic adventure lasted only 4 days- with a quick detour through Bosnia- but Croatia has landed firmly back on my never-ending travel roster.

I flew from Munich to Zagreb (the inland, capital city) on a Friday morning in a propeller plane over the Austrian Alps, collected my orange Corsa from enterprise rent-a-car (an automatic of course, much to my UK boyfriend’s displeasure) and waited for said boyfriend to arrive slightly later. We drove from Zagreb to Zadar (3.5 hours) without any traffic on the toll road, which was appreciated as I was nervous behind the wheel after a  5-month hiatus, and with only one stop for questionable sandwiches from a roadside gas station. The sunny drive was beautiful, and our landscape varied from lush & green to rocky and mountainous as we got closer to the coast.

We arrived in Zadar at 5pm, and I managed to park our rental (which we named Rachel Sully) on a narrow, potentially-pedestrian-only street near our hostel, The Drunken Monkey, after asking a local elderly woman if it was okay (She didn’t speak English, but she also didn’t seem to mind..). The hostel, hidden away amongst closely built residential dwellings, had a cozy and comfortable feel-equipped with a small bar and rooftop terrace. As we went out of season (story of my life), the hostel had only just opened, and staff were extremely friendly and accommodating. We had one beer on the rooftop terrace, much needed after the long drive, and set out for the pebbly beach to see the sunset. Pictures are worth a thousand words, and after a winter that hit -18 degrees Celsius in Munich, I was not disappointed.

On recommendation from a Croatian colleague, we headed to Bruschetta (a local & well known gem) for dinner-only to be confronted with a long queue for a table. We then headed to the Sea Organ (a must-do in Zadar) to hear the sounds of the ocean (…and mitigate the growling’s in our stomachs) and had a dance on the solar powered dance floor (Sun Salutation) that edged the waterfront. When the sun went down, we wandered into old town for a drink before re-joining the queue for Bruschetta, and when we finally got to enjoy the food (Truffle bruschetta to start, followed by shrimp risotto and a heavenly seafood medley) we were in pure bliss. Our lovely waiter, Boris, even brought us some schnapps mixed with red wine after we had finished, and when we left him a 20% tip (our decadent meal was only 30 pounds!!) he ran out to thank us personally as we made our way back into the old town.

We opted for a bar that had outside seating and live music, hidden down a crooked street. To my surprise & delight, the band began to play American country music – Garth Brooks! – And over my euphoric singing I noticed the table next to us shared my sentiment. The couple- Matt and Jenni, were on a working holiday with plans of traveling down the coast like us- joined our table, and we discovered that the man (Matt) worked for Facebook, and grew up down the street from me. He even knew my old house number, and his mother taught at my brother’s high school. Let me tell you boys and girls, it is a small world.

We bid them adieu, and made our way back to the hostel; only to be confronted by a drunken mess of riled up travelers and alarmed hostel employees. Apparently, the only other guests (Irish lads) had gotten into a fight with some of the locals down the street- and let’s just say, they didn’t win. Rhys and I managed to get inside the door only after the staff made sure we were also guests, and not looking to cause trouble. It was a little scary, but definitely an interesting end to our first night in Croatia. The next morning, the staff were extremely apologetic and even more accommodating- but we assured them it didn’t affect our experience. We packed up and hit the road for 9am-setting off for Krka National Park.

Disclaimer: Krka National Park is not Plitvice Lakes National Park– and does not feature as many waterfalls or crystal clear water. It is lesser known, but instead features hikes, allows swimming, has the Roski Slap waterfall, and (most importantly), is on the way to Dubrovnik from Zadar. As it is located in the middle of nowhere, Rhys and I alternated driving through rural towns and up and down cliff-hanging mountain roads to visit (with one incident of getting pulled over in a strange, hills-have-eyes-esque town). We spent about 2 hours exploring the park, hiking up the nearby mountains to get a panorama view and explore the caves, had lunch by the river, and then set off for Bosnia.

The last leg of our journey was to Dubrovnik- through Neum, Bosnia. Enterprise was very kind, and didn’t make us pay an extra fee for our planned meander in its bordering country. After a 30-minute wait at the border, we were shocked to find that the official checking cars wasn’t interested in seeing our passports, and simply waved us through. Another European country checked off the list, and possibly illegally! We followed the highway (and only main road), aiming to park in the centre of Neum- the only part of Bosnia touching the Adriatic- have some food, and sight see. What we were not expecting was the emptiness of the town, and lack of civilization. We parked, somewhat apprehensively, in a paid parking lot with nearby restaurants and bars- but there was no pay station, and the other cars in the lot looked like they hadn’t been used in years. Nevertheless, we left Rachel Sully, and wandered down the street to try and find somewhere to eat. Only we didn’t; we walked to the waterfront, looked around, took a picture, and got the he** out of Bosnia. 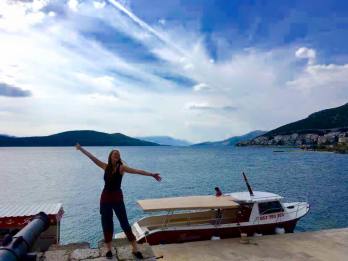 Getting back into Croatia proved to be slightly more challenging, as we had our passports checked AND were questioned before continuing on the Adriatic Highway (the most beautiful road in Europe..) and to the ancient city. We opted for a villa (Villa Ivan) close to the main road with spectacular views of the Port, and about a 25 minute walk to the old town. Parking is not an easy task in Dubrovnik- and I only managed it after missing the certain-death-drop from the main road, turning around in a spot that was too tight, having to move someone’s motorbike after possibly hitting….let’s just say it took a while. After dropping our bags with Ivan, we headed into the old town to see the sunset, have some beers, and eat some fresh seafood. 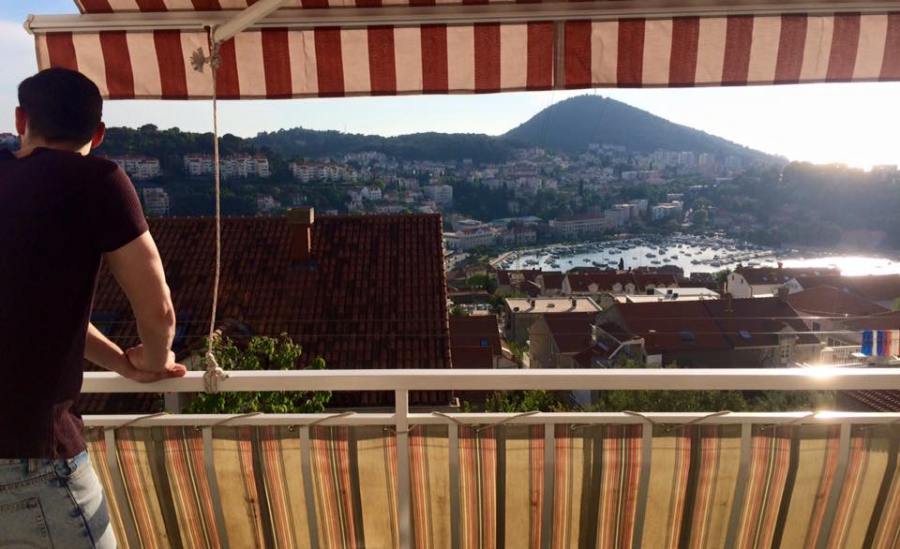 To navigate the old town- make sure you have sturdy shoes on- because you will walk up and down approximately 1 million steps (which are slippery when wet…learned that the hard way). We wandered around taking in the sights- and it truly is as breath-taking as pictures give away. We settled on a restaurant in the main square (the only one that didn’t have someone stop us in the street to see a menu with pictures on it…) and ordered Ozujsko (local beer) and mussels. We watched tourists from everywhere under the sun wander around in large excursion groups, a drunken and sunburnt British couple fight with exaggerated gestures, and even listened to some young explorers sing in the middle of it all the chaos- no doubt newly made hostel friends. We went to another restaurant to have oysters and ceviche, finally making our way to the famous Buza Bar where we enjoyed more beers on a bar literally suspended on the rocky outside of the famous fort walls, and listened to the wave’s crash below us. 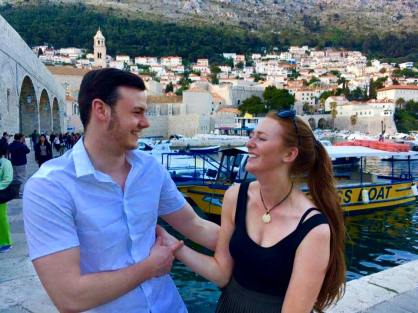 Here, we met an American brother and sister pair visiting with their mother, and they introduced us to two more Americans they met the previous night, (“co-workers” from Baltimore visiting for fun). We then added a Brit to our growing expatriate group (from London), and headed to an Irish bar to continue the merriment and share travel stories. 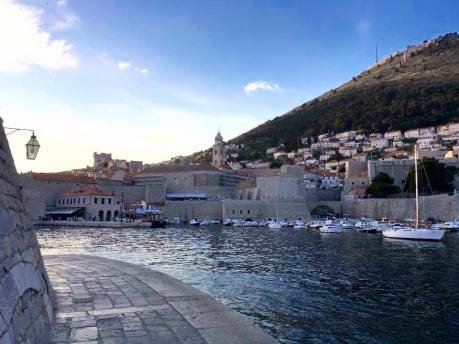 The next day we awoke to an unfortunate thunderstorm that kept us in the villa until 3pm when we could venture out without getting wet. As the weather improved, we got some pizza (a never-failing hangover cure that was needed after our heavy night…) and walked the ancient city walls encasing beautiful Dubrovnik. It was amazing standing on the old walls looking out into the endless ocean, and behind you, if you let your imagination wander, you could even take yourself back in time and picture what it would of been like to see an unfamiliar army lining the mountainous backdrop, leaving nowhere for escape. I have truly never seen a city so beautiful, so rich with tumultuous history, and still seemed to be ancient and intact (Also- no homeless people…which was bizarre). Everyone we had met from Croatia was friendly and proud of their country-and truly seemed to enjoy showing it off to visitors. Dubrovnik took my breath away figuratively with its undeniable magnificence, and of course literally with its 1 million steps. 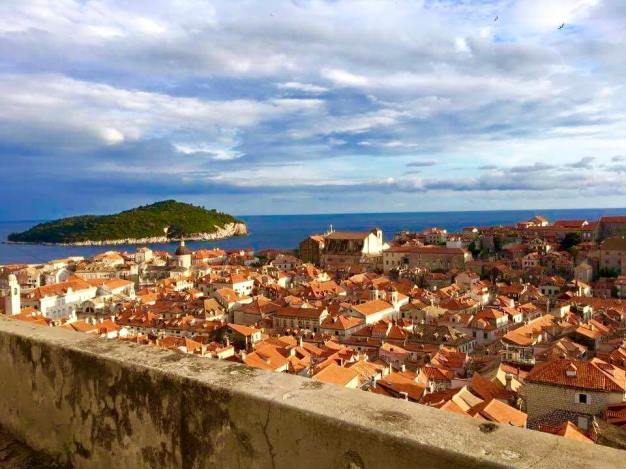 We left the next morning, bittersweetly returning Rachel Sully to her Enterprise family at Dubrovnik airport, where I then flew back to Zagreb (only took 45 minutes, compared to our 8 hour total drive time) and then back to Munich. I had less than 12 hours back at my flat in Freising before getting on another plane to another adventure…but that’s another story.

All in all, Croatia is undoubtedly the most beautiful country I’ve ever seen; from the inland countryside boating lush green expanses interrupted by jutting mountains, to the pebble beach lined seaside where thousands of island poke out of the Adriatic beckoning travels to explore them. Safe to say I am more than eager to return.

Borrowed clothes: For this trip I packed lightly, only borrowing a tank top from my mom’s former wardrobe which I was very thankful for in the heat. I wish I could have borrowed some good walking shoes after many blisters and sore feet, as well as an umbrella! ShouldaWouldaCoulda. 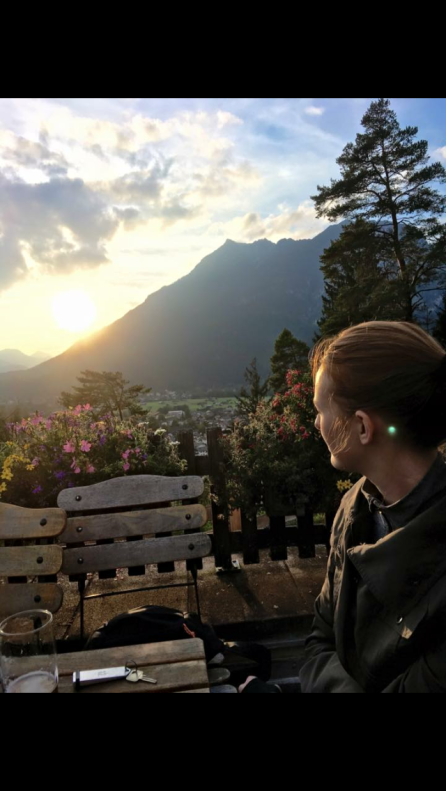 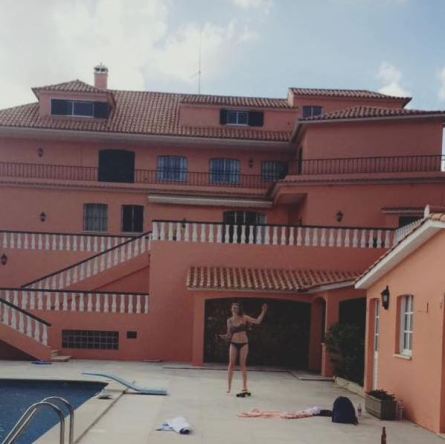 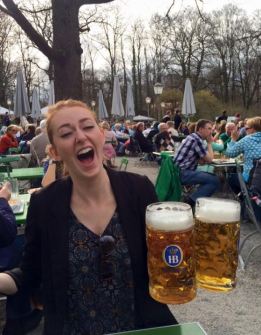 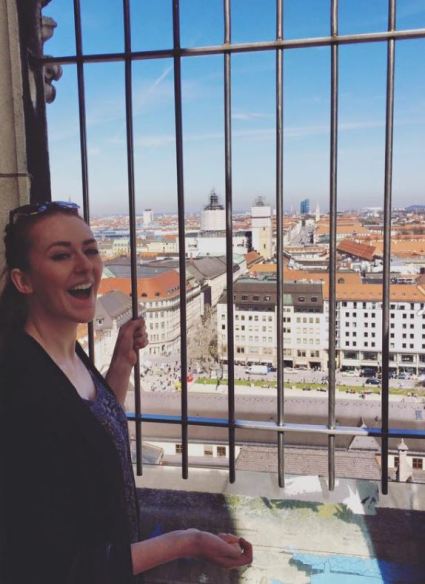 Milan from the duomo 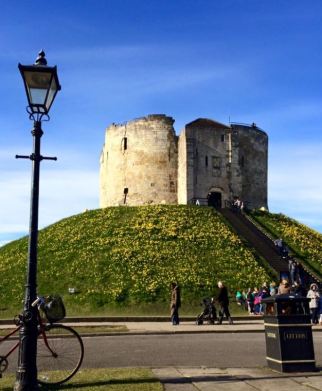 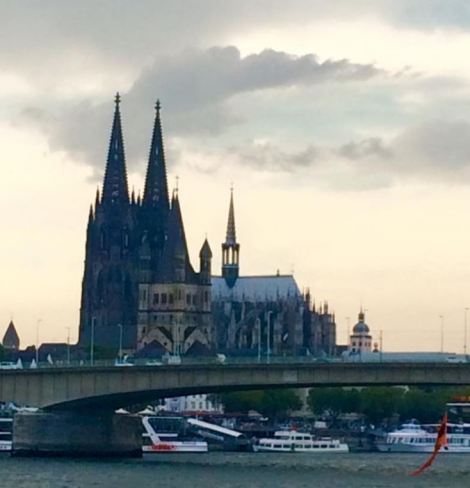 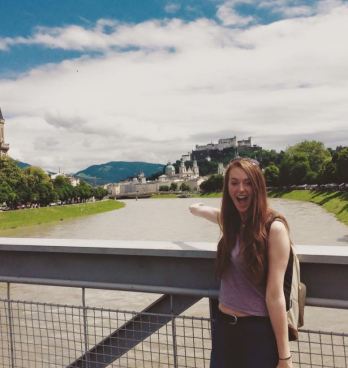 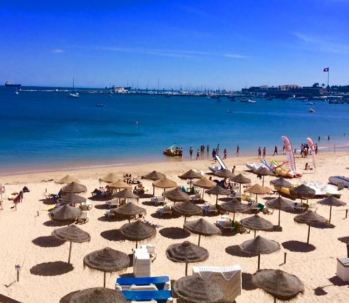 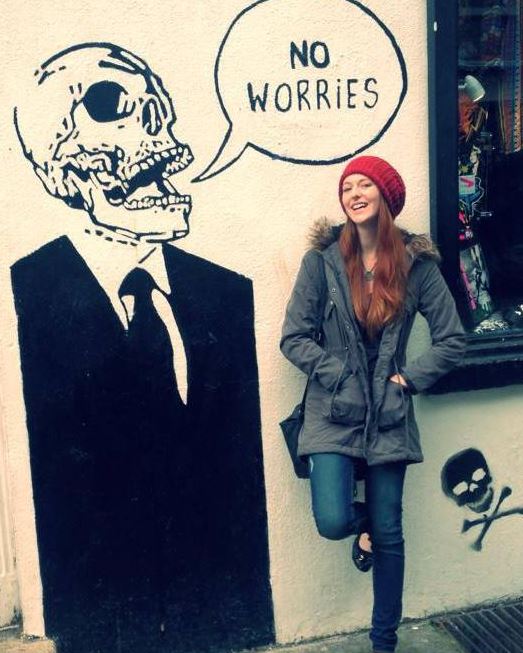 No worries in Dublin 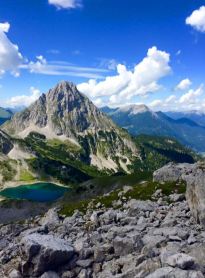 halfway through a hike 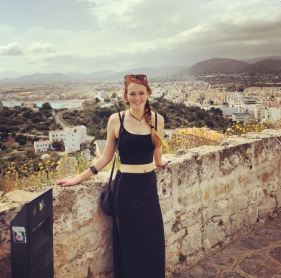 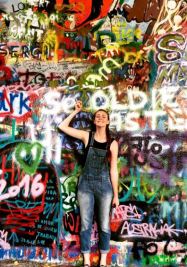 Somewhere in the German Alps 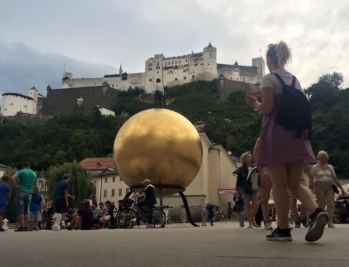 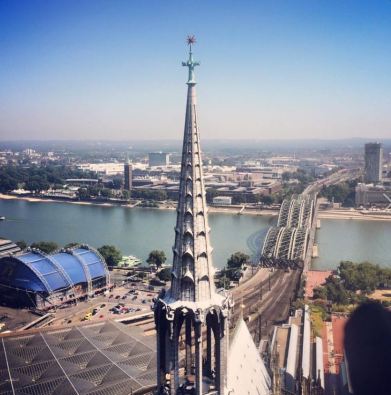 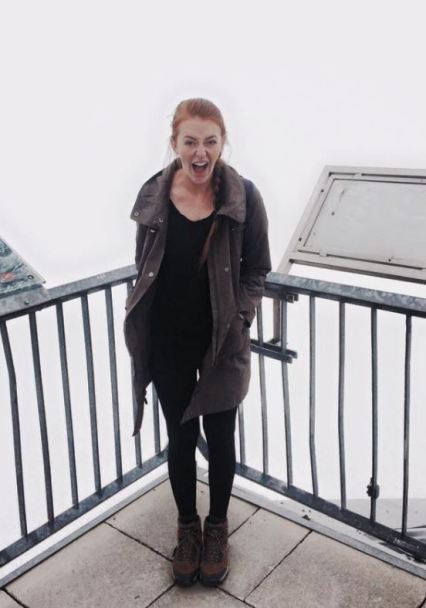 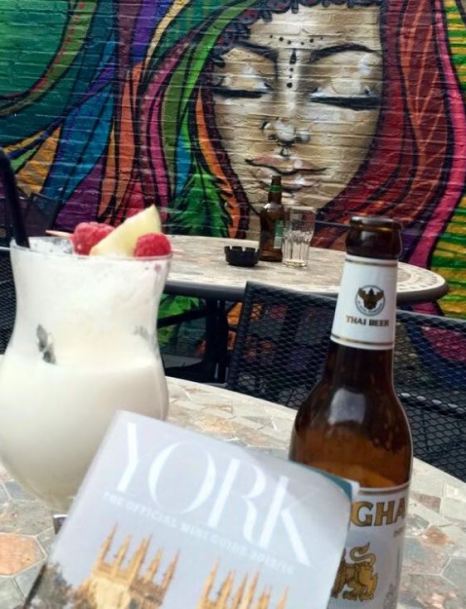 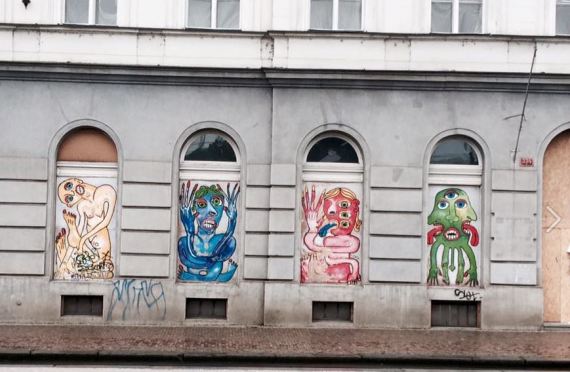 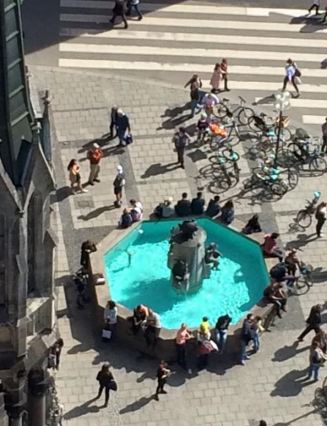 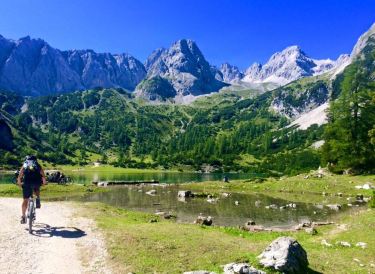 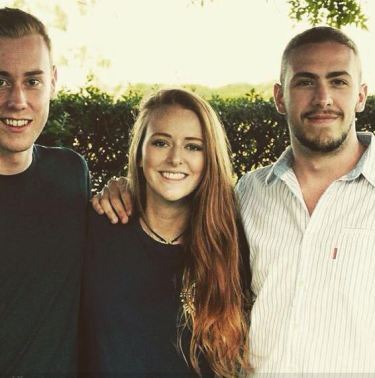 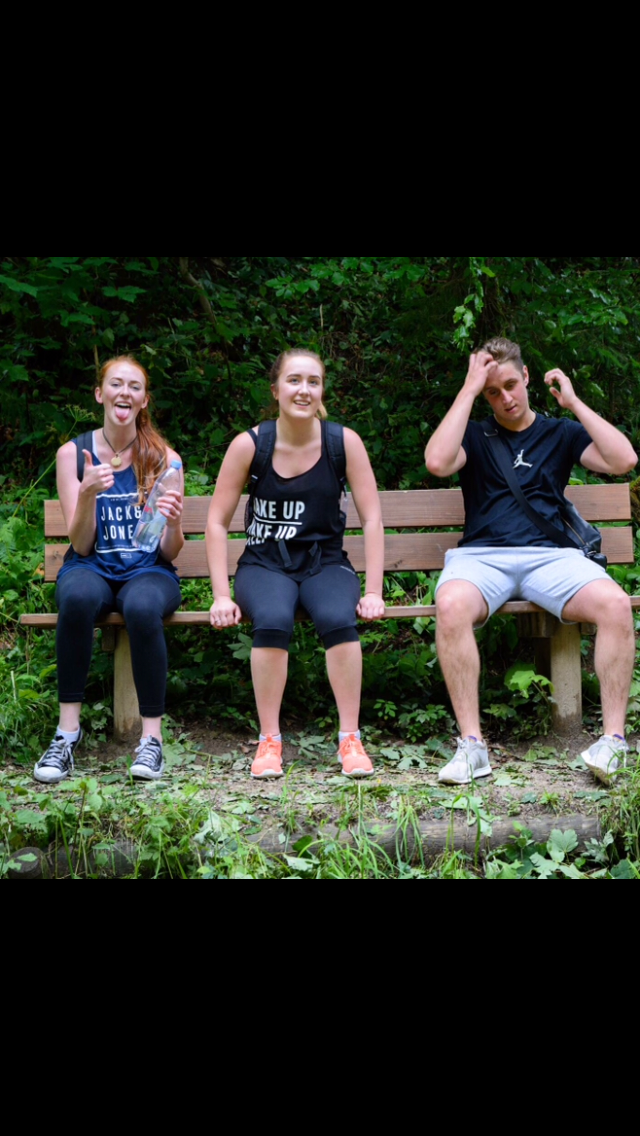 Tegernsee
Follow On the Road with Borrowed Clothes on WordPress.com